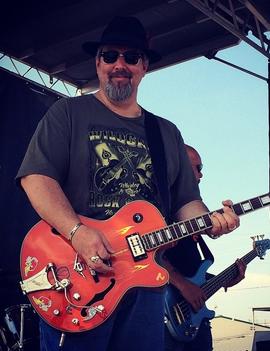 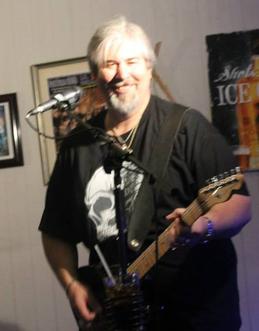 Rick Hendry comes from a musical family.  His Mother is a classical pianist, organist and choir director.  His Dad was a big band musician who played the USO shows with Bob Hope during the war and played with the likes of the Sauter-Finnegan Orchestra and Tommy Dorsey.
Rick started playing the guitar at the age of 9.  It was The Beatles when they played on Ed Sullivan and The British Invasion that influenced him to play the guitar; but growing up in St. Louis it was only a matter of time until he discovered the blues.  His influences include greats such as Albert King, BB King, Buddy Guy among many many rock guitarists of the great classic rock bands of the late 60's and early to mid-70's and 80's.
He has played in different bands all across the US, Germany, Holland and Belgium and in different venues-from small and intimate to gigantic open air festivals and indoor festival halls.  He has been in bands that were fronted by era stars Wolfman Jack and Walter Scott.   Rick also teaches guitar at Springfield Music. 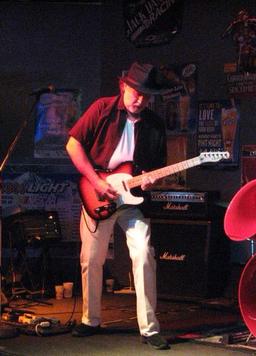 Want to know more? Visit our contact page and send us a message, we will respond back to you as soon as possible!

Dan Harmon picked up his first guitar at the age of 13. He had very little opportunity for formal training so he is almost completely self-taught. He has been involved in the music industry for over 25 years and during that time, he has been involved with several bands, and has also spent extensive time behind a mixing board. Besides being a musician, he is very knowledgeable about guitars and guitar history. Dan has personally owned over 200 guitars.

After a 3 year break, his wife encouraged him to return to playing music. 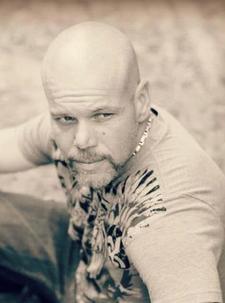 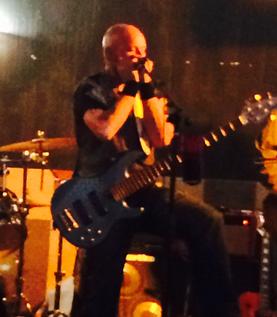 Be sure to check back often! Dates are being added, and our schedule will be updated!

Tony is a singer, musician and songwriter who started his musical career at an early age, singing his first solo in a church at age 5. Singing and playing bass guitar, he traveled with his parents in a southern gospel group throughout his high school years, as well as competing statewide and nationally through his school. At the end of high school, he received a college scholarship for music in Missouri and then went on to the University of Tennessee in Knoxville. While there, Tony recorded and released a song for the American Cancer Society through Kare Bear Records, and performed it live on the American Cancer Society Telethon on ABC. While living in Nashville, he was the feature artist and performed a showcase on the Grand Ole Opry in Nashville, TN.  Additionally,  the song titled “Still Under The Weather”, written by Skip Ewing, was released to him by Acuff Rose Records. This song was previously recorded by Shania Twain on her debut album in 1993. He arranged and recorded this song as well in Nashville, Tn.

Tony later wrote, recorded, and produced a CD with the single titled “For The Love Of A Child”, which features him on lead vocal, backup vocals, bass guitar, and harmonicas. This project was featured in the South Bend Tribune in Indiana, The San Francisco Chronicle in California, Fox28 News in the morning, and B100 radio in South Bend, IN.  CD's were sold in the states of California, Indiana, Kentucky, Tennessee and Ohio, to name a few, as well as Australia and Scotland.  Tony has also been involved with several studio recording projects for various artists.

Tony is still actively writing songs and music, writing the lyics and music for all the tracks on their latest CD, "Live The Journey".

We're thrilled to be playing in Springfield and the surrounding areas!! With decades of combined experience, we've been bringing audiences the best live shows and music all over the country. Now based here in Springfield, we're continuing with our creativity and interaction with our fans, and we are ready to party with you all! And yes, we will rock and roll all night long!!

Raymond started playing drums at a young age and has been a serious active musician since he was 18 years old. He has been performing since. Raymond was born and raised in the north of the Netherlands, where he grew up in a little town. He moved to the USA in 2006. Through the years Raymond has performed for several bands like: Dan Conklin and the Regulators, Jason Kinney Band, Don Collins and Firecreek, Chase Robinson and with DeetoxX, Strange and A.S.N.Y. back in the Netherlands, and has made several recordings.

THE COOLEST MUSIC VENUE IN TOWN! WE DO THIS FOR YOU!!
The Mason Dixon Band
Contact us! 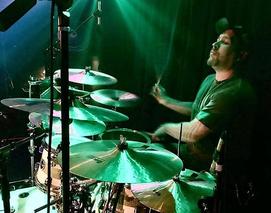 Sell music on itunes at ReverbNation.com
View on Mobile